Evaporated Milk – which is the best brand? 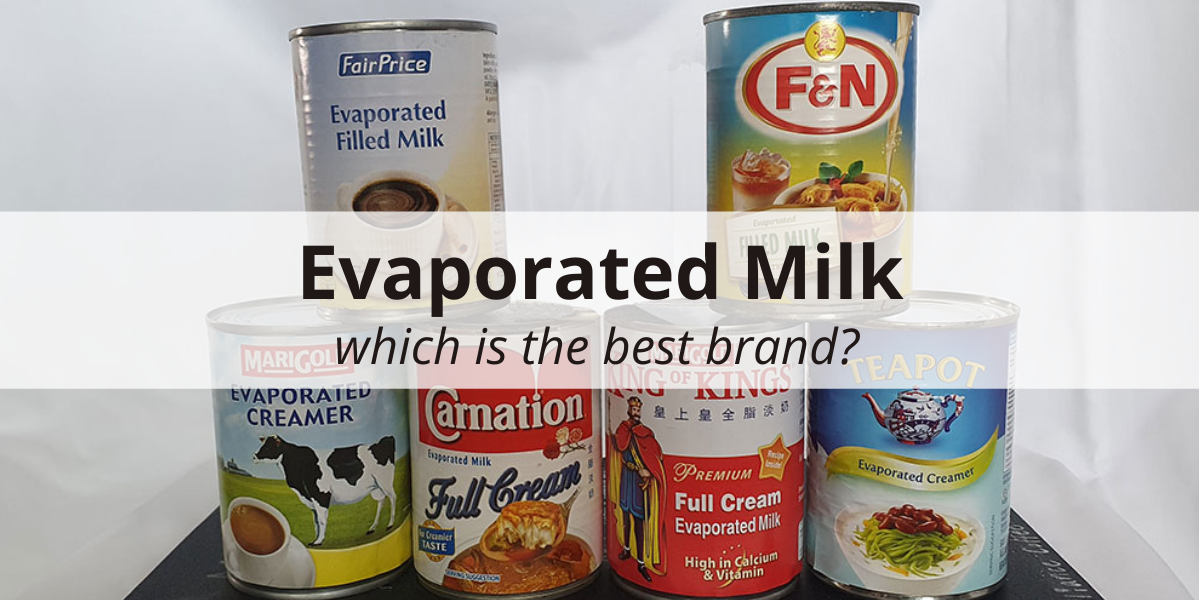 Evaporated milk is in our opinion, is the secret ingredient to a balanced cup of kopi or teh. You’ll find it a handy condiment to have if you’re trying to brew your own kopi at home.

Sadly, it tends to be overshadowed by its sweeter counterpart, condensed milk.

We serve local kopi and teh as part of our traditional kopi cart service.

To elevate the taste of our drinks, we look for the following characteristics in an evaporated milk product:

While we were developing our recipes, we were curious if there are significant differences in these characteristics, across brands of evaporated milk.

So, we headed to the nearest supermarket, got our hands on the most commonly found evaporated milk products, and drank a ton of kopi to find out.

Disclaimer! This is not a scientific experiment, there is nothing statistically significant. Everything written below is based on our opinion and taste.

tl:dr; don’t troll, experiment to develop your favourite kopi or teh recipe instead.

How we ran the test

6 different evaporated milk products were purchased at the nearest supermarket.

Two rounds of tasting were done, focusing on different purposes;

We purchased 6 evaporated milk products from different brands, they are:

First, we tasted the evaporated milk straight from the can.

Not the most exciting part but knowing how the evaporated milk tastes allows us to compare the products directly.

It also gives us an idea of how the evaporated milk will affect the final taste and experience of our beverages.

There were also detectable differences in the evaporated milk.

Pardon my poor camera skills, but you should be able to see the difference in intensity between the various brands. (FnN Evaporated Filled Milk is not included above as it was added in during the 2nd run of the test. Colour-wise, it lies between Marigold King of Kings and Carnation.)

Marigold King of Kings, Carnation and FnN were also more viscous compared to the rest.

Best tasting evaporated milk by itself? In my opinion, it’s the F&N Evaporated filled milk.

But I doubt you’ll want to drink evaporated milk straight from the can, so on to the more important test:

Drinks in the same category were brewed using the same concentrate, in a single seating.

Our drinks recipes are shared here. I’ve also listed them in the section below.

In this part of the test, we tasted the assembled beverages and compare the differences.

We liked that the Marigold Evaporated Creamer is versatile and works well for all beverages, but loved the milk tea made with Carnation’s Evaporated full cream milk.

With exception to Fairprice Evaporated Filled Milk (I would personally avoid it), all of these evaporated milk would produce enjoyable kopi or teh beverages with small tweaks in our recipes.

In a nutshell, here are our takeaways:

P.S. I may be slightly biased. At Alliance Coffee, we use Marigold’s evaporated creamer for our recipes.

If you’re using other brands, you may need to tweak the recipes according to your taste and preference. (but this article is not sponsored, we carried out this test simply because we were curious about evaporated milk options.)

Every coffee shop in Singapore uses different brands and different recipes, which ultimately affects the taste of their drinks.

Here, we share the recipe used at our Traditional Kopi carts or pop ups.

To ensure consistency across our stage 2 test, we use the same recipe, substituting only the evaporated milk product. Coffee and Tea concentrates are pre brewed and used to assemble the final drinks. (This is how we brew kopi)

Here’re the recipes we used for this test:

Although evaporated milk is commonly used in the ‘C’ or ‘Si’ beverages, we’ve noticed that it gives our kopi and teh a good mouthfeel. If you find your kopi a little thin, give evaporated milk a try.

Evaporated milk refers to milk that has been reduced by heating while evaporated creamer refers to a reconstituted milk product made by combining milk solids, edible vegetable fat and water.

This is probably the first question that will come to mind if you’ve ever needed to purchase some evaporated milk for cooking, baking or even brewing coffee. Evaporated milk and evaporated creamer tend to be used interchangeably, especially in local coffee shops.

Here’s a more in-depth explanation of their differences:

During the manufacturing process, approximately 50% to 60% of its original amount of water is removed, leaving a thicker, more concentrated milk product that looks creamy.

Because of the process it undergoes, evaporated milk is often characterised by a subtle caramel (or toasty) taste. It is often used in cooking and baking for a creamier texture and to add an additional flavor dimension and is said to contain high level of protein and calcium.

You can even make your own evaporated milk. Here’s a tutorial on youtube.

On the other hand, evaporated creamer is a reconstituted form of milk.

It tends to be less sweet compared to evaporated milk and is often used in beverage recipes (i.e. coffee, teas, fruit juices, etc) as well as desserts to provide a creamier, thicker mouthfeel.

Another common ingredient in local coffee is condensed milk.

We’ll dive more into condensed milk in another article…soon.

What is evaporated full cream milk?

What is evaporated filled milk?

Filled milk refers to milk that has been reconstituted with vegetable oil (or fats) from other sources (instead of daily cows). Evaporated filled milk is usually used for cooking and baking and rarely used in beverages as it has an unusual characteristic flavor.

For the scientific definition of evaporated milk, you can read this chapter from the book “Encyclopedia of Food Sciences and Nutrition” on Science Direct.

Can I use fresh milk instead of evaporated milk?

However, do note that evaporated milk products are generally thicker and this contributes to the mouthfeel of your final drink.

We’ve also noticed that fresh milk do not seem to cut through the kopi concentrate as well. You will need to tweak the recipe to your preference.

Can I use oat milk instead of evaporated milk?

Do you sell evaporated milk?

No. You can check out the supermarket near you, or find evaporated milk products on Lazada, Shopee or Qoo10.

I talked to (and “spied” on) several of favorite kopi shops. It is of no surprise to notice that the evaporated milk product of choice varies between the coffee shops.

The most popular products based on my rather limited observation are: Marigold’s Evaporated Creamer and F&N’s evaporated filled milk.

Unfortunately, it can be difficult to get your hands on F&N’s evaporated filled milk. These seem to be mostly sold B2B, I’ve only seen it at selected ABC discount stores. You may also find it on Lazada or Shopee.

We did a quick, small scale taste test of 6 different evaporated milk products with our kopi and teh beverages.

Marigold Evaporated Creamer and F&N Evaporated Filled Milk are good options to start with. If you like a milky aftertaste in your kopi, King of Kings is a good option.

Regardless of your choice, you will probably need to tweak the recipe to your liking.

Start brewing kopi at home with our kopi kits!

Which non-dairy milk is best for coffee?

How to make Kopi at home (3 easy brew methods)